Barra MacNeils will be appearing at Toronto’s Massey Hall 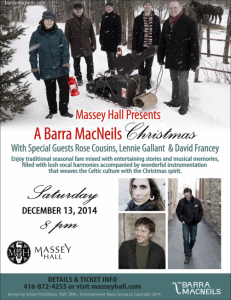 The Cape Breton siblings have been performing in Canada, the United States and Europe for decades entertaining audiences with their special Celtic spirit.

Sheumas, Kyle, Stewart, and Lucy MacNeil began performing in 1980 and brothers Ryan and Boyd joined the group in 2005. Their name comes from the island Barra in Scotland where their clan is from. Winners of five East Coast Music Awards the siblings have worked nonstop including being an opening act for Celine Dion.

Read the whole article at http://newz4u.net/the-barra-macneils-are-coming-to-town/