The Barra MacNeils are…

Other recent releases have covered the span of their entire career, as well as live concerts reflecting the musical course of their career, from humble family beginnings to worldwide acclaim. The concert touring in support of these projects has taken the group to theatre and festival stages coast to coast across Canada, had them jetting across America from festival stage to theatre stages and beyond, as well as sending them to Ireland and Scotland for prestigious events across the Atlantic.

As a group, the MacNeil siblings are widely regarded as one of the greatest live concert acts in the Celtic world. Hailing from Sydney Mines, Cape Breton Island, Nova Scotia, the family group is deeply rooted in Celtic music, culture, dance, language and history. Their numerous critically acclaimed recordings have included their own original songs as well as tried and true standards, both instrumental and vocal.

The Barra MacNeils live concert experience brings so much more to the stage than most live acts ever can. Multiple lead vocalists, beautiful sibling harmonies, top drawer instrumental prowess on a wide variety of acoustic, stringed, percussion and wind instruments blended with dancing, storytelling, Gaelic songs and a journey through an ancient culture; it is family entertainment at its highest level.

Steeped in Cape Breton tradition with strong Celtic roots and musical artistry, this diverse and talented family group continues to wow audiences around the world with their captivating vocals, harmonies and extraordinary musicianship.

Canada’s Celtic ambassadors, the Barra MacNeils continue to perform to sold out audiences throughout Canada, the United States, the Caribbean, the United Kingdom and Europe. From headlining major festivals, concerts, special guest appearances (Rita MacNeils CTV Christmas Special, performing with The Chieftains) television specials, film and television placement (Men with Brooms Soundtrack; Racket In The Attic) and their annual Christmas tour, they have set the course with a solid foundation for success. The Barra MacNeils one-hour Christmas Television Special (2000) continues to be broadcast on Country Music Television (CMT) and on the Public Broadcasting Services (PBS) network in the United States. December 2007 saw the broadcast of a new Christmas Special which will no doubt also become part of the holiday season for years to come.

The Barra MacNeils continues to do what they love to do best, and that is playing their music for the fans. This incredibly talented family group tours Canada, the US and Europe to spread their distinctive brand of Celtic music worldwide. Visit the calendar page to see where to find them next!

Kyle MacNeil loves his job. A founding member of the Barra MacNeils, music has been a focal point in Kyle’s life for as long as he can remember.

The MacNeil children were encouraged at an early age to play music and to this day associate it with good times and being surrounded by relatives and friends. It is a feeling the Barra MacNeils bring with them each time they take the stage. Kyle started playing guitar at age seven and soon after switched to violin, on which he was classically trained at Mount Allison University.

The pinnacle of his impressive musical career includes sharing the stage with international superstar Celine Dion when the Barra MacNeils opened her sell-out “The Colour of My Love” tour. Playing sold out stadiums was an experience Kyle will never forget, but regardless if they are playing in front of college kids, soccer moms or retirees, the Barra MacNeils’ engaging performances are always something special for the audience and performers alike.

Kyle currently teaches a Cape Breton fiddle course at Cape Breton University, and also offers private lessons in both the Cape Breton and the classical violin styles. When not on the road, Kyle regularly hits the ice for a game of hockey or perfects his swing on the golf course.

The only girl in a family of five boys, Lucy MacNeil can be described as the heart of The Barra MacNeils. Her crystalline vocals are immediately identifiable with the group’s quintessential sound. 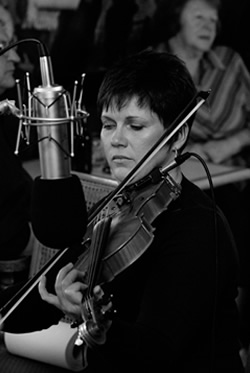 For Lucy, music has always had a heartbeat and she recalls it as the centre of her childhood home where family, neighbours and visiting musicians were often known to gather — the perfect rhythm of everyone’s feet tapping with the music would lull her to sleep on many nights.

Lucy’s own musical journey officially began when she was 9 years old, but even before that she was step dancing alongside her mother, a well-known local dancer and teacher. Her career with The Barra MacNeils has seen her opening tours for international stars such as Celine Dion, Kenny Rogers and fellow Canadian Rita MacNeil. Yet, with all the many rich and rewarding experiences Lucy’s fondest memory of performing took place in grade 10 at Memorial High School. A contestant in the winter carnival pageant, she put together a performance for the talent portion that drew on all her talents – singing “The legend of the St. Anne’s Reel” playing the fiddle between verses and then ending with a step dance routine. The remarkable effort would lead to her very first standing ovation.

A devoted mother of two talented young girls, Lucy finds time to enjoy life’s simple pleasures, from sharing recipes with her mom, and getting car care advice from her dad, chatting with old friends or dancing to the infectious latin rhythms in her ZUMBA class. Lucy MacNeil looks forward to discovering where music and her extraordinary life will lead her next.

His earliest memories of music are of holiday, weekends or any family gathering at his grandmother’s home in Washabuck, N.S. where aunts, uncles, sister, brothers and cousins would fill the rooms with music, dance and laughter.

Sheumas was 8 years old when he first began to play, and now cites performing on stage at local concerts with his son, daughter and brother Kyle as one of his career highlights. This familial connection and the authenticity of the music that resonates in every Barra MacNeils’ performance creates a unity and connection between the performers and the listeners which Sheumas continues to be inspired by.

When Stewart was six years old he got a harmonica for Christmas. By dinnertime he could play “These Are My Mountains”.

He took it to school in January after the Christmas break and his primary teacher took him around from class to class to play it for them. Music was always there. Good times and lots of relatives and friends being around were always associated with music. Everyone had their own song or could play fiddle or piano or would jump up and step dance. It wasn’t how good you were. It was about being a part of it.

With brothers Sheumas, Kyle, he started playing at local parish concerts. Their mother would rehearse a few songs with Sheumas playing fiddle and piano, Kyle on guitar and fiddle and Stewart played harmonica. Sometimes she would play piano with them. They found a balance between playing music and playing hockey- that’s what they enjoyed most.

Stewart evolved into a multi –instrumentalist, vocalist, composer of songs, lyrics and tunes, arranger and dancer and continues to explore creativity and art through the 25 years plus career of the Barra MacNeils.

Stewart has been learning Gaelic for a few years now and hopes to be fully fluent in Gaelic someday.

Boyd MacNeil always knew that music would be a big part of his life. The youngest sibling in this musical family, Boyd is separated in age from the eldest by 20 years.

Boyd first received his first violin lesson at the age of four, and 4 short years later made his performing debut at a local Remembrance Day ceremony. In his mid-teens, Boyd and his brother Ryan were special guests in the odd concert with already established quartet, The Barra MacNeils; officially joining the group in 2005.

Later, music took on a greater meaning for him when he started travelling and performing with the Barra MacNeils’ and witnessed time and again how the groups’ music could move, affect and transform an audience.

Boyd MacNeil has toured Japan with Celtic music legends the Chieftains, and continues to explore many musical ideas within and in addition to his work with The Barra MacNeils.

When not making music, Boyd puts his interest in carpentry to good use around the house and is noted to be pretty handy in the kitchen too.