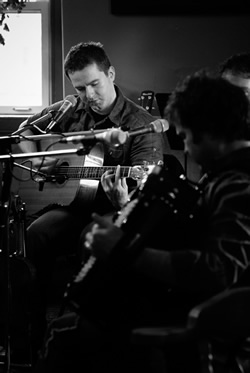 Boyd MacNeil always knew that music would be a big part of his life. The youngest sibling in this musical family, Boyd is separated in age from the eldest by 20 years.

Boyd first received his first violin lesson at the age of four, and 4 short years later made his performing debut at a local Remembrance Day ceremony. In his mid-teens, Boyd and his brother Ryan were special guests in the odd concert with already established quartet, The Barra MacNeils; officially joining the group in 2005.

Later, music took on a greater meaning for him when he started travelling and performing with the Barra MacNeils’ and witnessed time and again how the groups’ music could move, affect and transform an audience.

Boyd MacNeil has toured Japan with Celtic music legends the Chieftains, and continues to explore many musical ideas within and in addition to his work with The Barra MacNeils.

When not making music, Boyd puts his interest in carpentry to good use around the house and is noted to be pretty handy in the kitchen too.