A non-Christmas tour in Halifax!

“It’s been a few years since we’ve done a non-Christmas tour down there. It’s nice to have a new album to bring out,” he said. “We toured new music in Ontario and did select dates close to home in the summer. Our material has been well-received and we are all having fun.” “It has original material, and we’ve gone traditional, Gaelic and hits spots people expect from the Barra MacNeils,” he said.  “We also did some material that stepped outside of our comfort zone, and it’s nice to delve into roots new and old.” 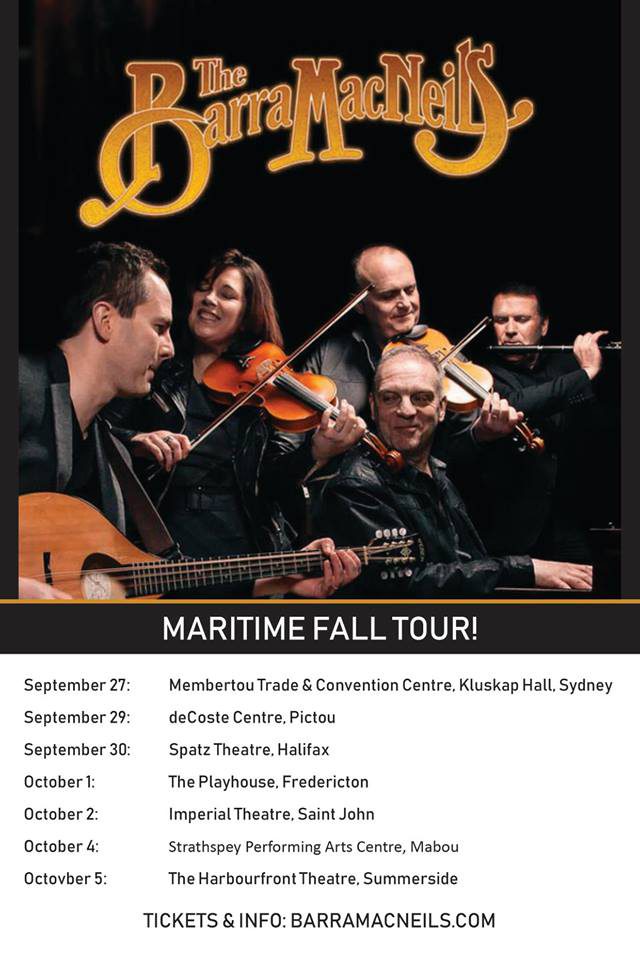 “On the Bright Side” fall east coast dates

The Barra MacNeils are bring their new music to the Maritimes this fall!
Hear old favourites and new songs from their latest studio album, “On the Bright Side”.
Tickets and details on calendar page!
*Sydney tickets will be available at a later date. Stay tuned.

“For over 30 years, The Barra MacNeils have been travelling and spreading their music throughout the world. With the recent release of On The Bright Side, an upbeat album with catchy tunes and a little something for everyone, they’ll embark on tour in August and throughout the fall…”
“Dubbed as Canada’s Celtic ambassadors, The Barra MacNeils are sure to entertain both young and old with their eclectic array of music. Definitely check them out if they are in your area!”

Top-notch entertainment can be found this summer on various Cape Breton stages
The Barra MacNeils have been at it for more than three decades and even after all that time, they are still a popular and in-demand group considered one of the best Celtic concert bands on the circuit.
Celebrating that fact, the Sydney Mines family recently released a new CD, “On The Bright Side.” Recorded and mixed by Jamie Foulds at Sydney’s Soundpark Studios, the 10-cut project highlights their traditional roots but pushes the edges with some new material.
This is a wonderful recording, from the opening notes of the lively “Welcome to Boston” through to the swinging finish with the “Saratoga Set.”

They’ve been at it for more than 30 years but there’s nothing like a new album to keep the Barra MacNeils’ spirits “On the Bright Side.”Lucy MacNeil says the new album has a more optimistic slant and as far as she’s concerned, the group has never sounded better.

“In my mind, I think this is one of our best releases yet.”
“I really feel all of us are singing better, playing better than ever. We like how it flows.”

The hometown concert has become an annual event for the family band and this year, the concert will take place at St. Andrew’s Presbyterian Church. The group is touring this year in support of its latest release, “On the Bright Side.” It’s an upbeat album, with fiddle tunes that should erupt into a flurry of step-dancing on stage. The recording and shows will also feature the first single from the release, “Living the Dream.”
Tickets are $30 for general seating, and the doors open at 6 p.m. with the concert starting at 7 p.m. They are available now at Shoppers Drug Mart in North Sydney, Pharmasave in Sydney Mines, or reserving by email at f.johnston@bellaliant.net or 902-736-2508.

The Barra MacNeils at home

Music review of the day: On The Bright Side

…the new album has kicked off a string of live dates the last few months, partying it up in Toronto this week. Having caught one lately, I can report they’re kicking up a storm. What has always set the group apart has been the flexibility of the family, each member able to bring something different to the table.

NEW MUSIC: The Barra MacNeils display Cape Breton proudly with On The Bright Side

Iconic Cape Breton band/family The Barra MacNeils have graced the ears of the East Coast once again with their newest album On The Bright Side. The ten-track recording is packed with everything an islander loves; an abundance of the fiddle, a jig here and there, and even Cape Breton staples like a full Gaelic track are present in The Barra MacNeil’s latest. The Celtic music powerhouses are no strangers to success, and On The Bright Side is bound to be a pleasing return for listeners old and new.